The Ames housing dataset is famous as an open Kaggle competition and for its use in undergraduate statistics courses as an end-of-term regression projectSee here. Unlike the similar Boston housing dataset, it has a relatively large number of variables81 versus 14 and observations2,580 versus 506. In tackling this problem, we would have to go beyond a simple, automatic algorithm such as stepwise selection, to construct a final model.

In this project, we took on the persona of being a data science team at a made-up local realty firm, Regression Realty, in early 2011. Our stakeholders were primarily our firm’s listing and selling agents and our goals were to:

You can find our code and presentation slides on GitHub.

The data comprises information collected from the Ames City Assessor’s OfficeRather than from traditional MLS data sources during 2006—2010 with variables being nominal, ordinal, continuous, and discrete in nature. As a real-world dataset, it required extensive cleaning and feature engineering to be able to garner insights and create models.

We dropped one duplicate observation and removed two outliersWhere GrLivArea > 4,000 feet2 as per the recommendation of the dataset authorDean De Cock. Journal of Statistics Education Volume 19, Number 3. Another approach would have been to define outliers as properties whose sale prices were more than, say, four standard deviations from the mean. This would have dropped five points in our case.

We imputed missing valuesFor implementation details, see clean.ipynb for features by taking the mean, median, or mode as applicable of the feature category.

Sometimes, imputation was done by making reasonable assumptions. For instance, a missing GarageYrBlt can be imputed by the year the property was built. Finally, we imputed None (e.g., MasVnrType) or 0 (e.g., MasVnrArea) for values that might not exist or for which an educated guess could not be made.

In addition to the given dataset’s features, we added two more we thought might influence a property’s SalePrice:

Ames has five school districts and we might expect property value to vary based on the quality of the school. By determining whether a property’s latitude and longitude coordinates fall within the district’s boundaries, we can determine the school district. First, we used geopySee geo_locations.ipynb to query OpenStreetMap’s Nominatim geocoding software to acquire the property coordinates. There are several python and R tools to help solve the point-in-polygon problemSee districts.R. We used R’s sf package. 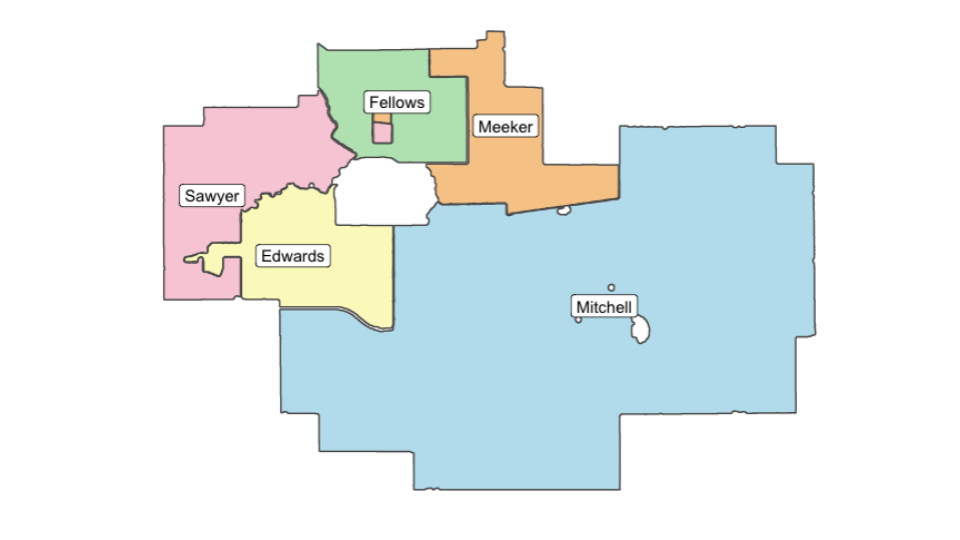 We also derived features we believed might be useful, such as whether a property is near a park, an arterial road, or a rail line; if it is a Planned Unit Development (PUD), has been renovated, has a pool, the number of floors, etc.

First, we see Ames properties plotted against school districts. We also plot the schools, a hospital, and Iowa State University.

We will later see whether school districts matter (and how much) for a city like Ames. Compared to features such as Neighborhood, we will see that district is not as important.

Still, all that mapping was useful as an EDA tool and to check our assumptions.

Area features display increasing variance as we see below. We see the plots of SalePrice (y) versus GrLivArea (x) as well as the residuals.

We went with a log-linear transformation in our models as it showed a lot of improvement in reducing the “<”-shaped spread in property sale prices. Log-log shows marginal improvement, but is also harder to explain to a layman. When taking a transformation, we must remember to reverse the transformation after our model makes a prediction.

Size matters…in most cases. The price of a single family home is strongly correlated with the number of rooms in the home. Not so with other home types.

What this means is that we can treat Neighborhood as an ordinal feature in our models. 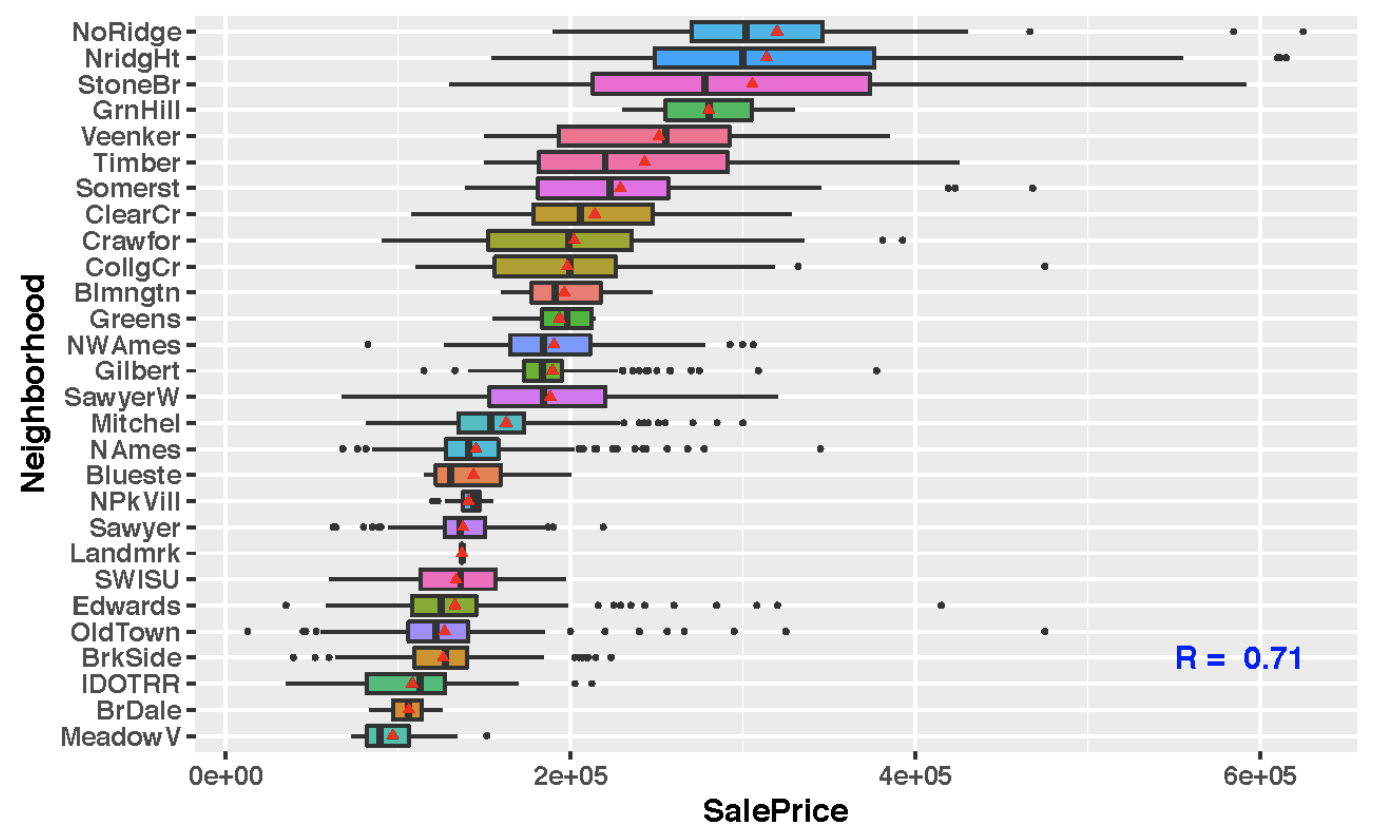 In addition to exploring the dataset itself, we wanted to focus on the Ames housing market dynamics. We came in to this with a lot of assumptions—the 2008 crash must have caused house prices to fall. Seasonality patterns in the housing market must change too. Surely, single-family homes would be more resilient than multi-dwelling units to the depressed market conditions?

We used a SARIMA model to look at average SalePrice for the dataset. We split up the properties by quintile to see if there was a difference between expensive and cheap houses. 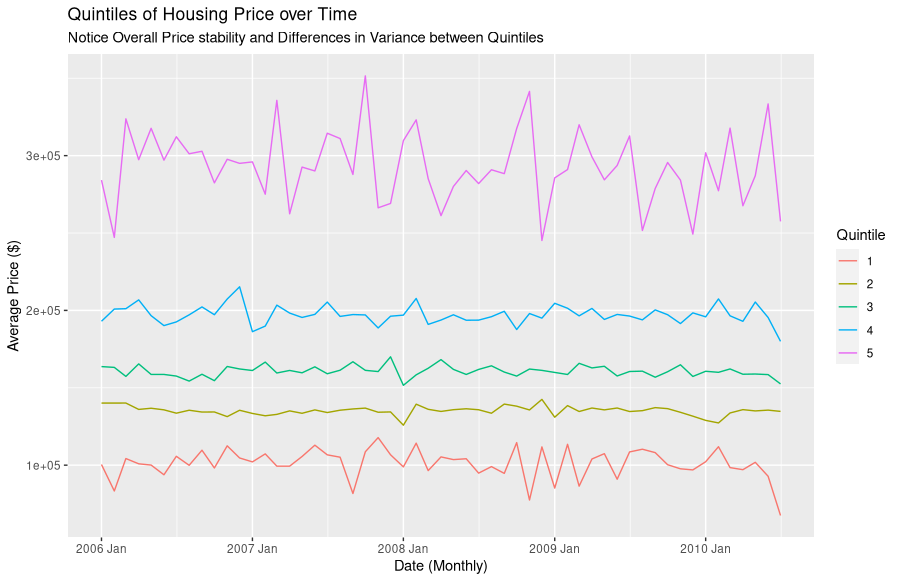 We can see that in 2006-2010, the house prices by quintile stayed relatively constant. This is counterintuitive, since the housing market collapsed in 2008, and we do not see that reflected in any of the quintiles. Given that we lived through this recession and knew house prices to be falling where we grew up, we were perplexed at what was going on in Ames. We conducted a Ljung-Box testSee code to see if we could reject H0—whether the data are independently distributed. I.e., the correlations in the population from which the sample is taken are zero, so that any observed correlations in the data result from the randomness of the sampling process.

The Ljung-Box test for each quintile reports a p-value that is over the threshold of 0.05, meaning these values are white noise distributions around an average value. This is an extremely stationary dataset—remarkably so. 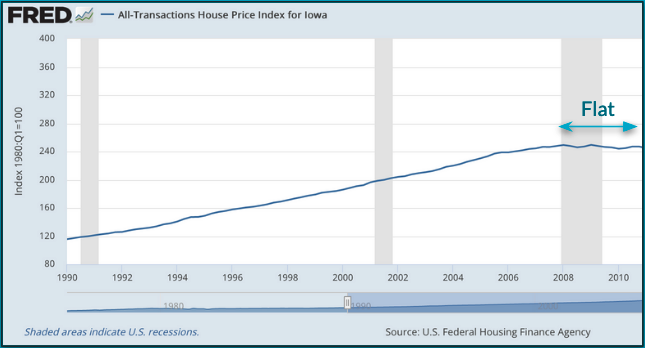 However, looking at the U.S. Federal Housing Finance Agency data from 2006-2010, we can see that in Iowa, the prices stayed remarkably constant even through the housing market crisis. This accounts for how unintuitive the results we’ve seen were–housing in Iowa itself behaved in a counterintuitive way.

Looking on to the left, we can see that the whole of the average number of houses sold at each date oscillates with a regular seasonality through the year.

This is important for Regression Realty’s realtors, as they know that they should now switch back to focusing on expensive houses and that the market might be recovering.

Finally, we use a SARIMA model

SARIMA
Seasonal Autoregressive Integrated Moving Average: An extension to ARIMA that supports the direct modeling of the seasonal component of the time series. It is a statistical model that uses Seasonality, Autocorrelation, Differencing, and Moving Averages to predict future data given only past data.

to predict property prices given past data with an 85% confidence interval. Our model uses the past four years of data to predict the following year with an RMSE of $14,167. Remember that this is the prediction for the housing market, not a particular house. We could adapt this model to train on a particular Neighborhood or quintile to get more targeted average predictions for a realtor. 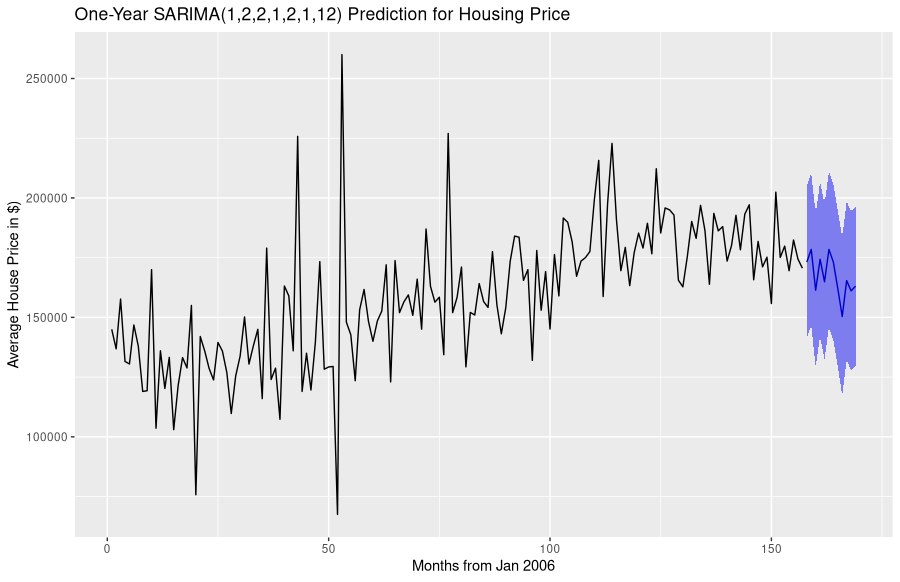 We used several models in this project to predict SalePrice. In order, they were

And separately for the market analysis,

Although there were multiple complicated models that we applied to the dataset, they did not drastically outperform linear regression in predictive power. This dataset is very conducive towards using linear regression—unsurprising as it was designed to be a regression end-of-semester project.

Below is a comparison of our models.

In addition, we used a time series model to predict average SalePrice for the entire Ames housing market. This would be a more robust with more observations, such as in a larger city or if we had more complete data for Ames.

The following shows ways we checked the assumptions of multiple linear regression. We paid special attention to not inflate VIF by introducing multicollinearity when adding new features during feature selection.

The most simple model, multiple linear regression, has benefits in that it is easily explainable. We see that by changing a feature by 1-unit, there is a positive or negative effect on SalePrice. This is useful for a realtor as they might be able to recommend a client install central air conditioning should they find a good deal on installation.

We achieved our aim of providing value for the (fictitious) realtors in our organization through our data analysis and predictive modeling. The insights and predictions can be surfaced through a Regression Realty app so that an agent can see recommendations for renovating or setting a sale price on a particular house.

Our fictitious firm would provide us access to MLS listings, which would be incorporated into the app. Unfortunately, MLS data is not publicly available, so we could not include it in our analysis.This would cut down on the number of features a realtor would have to manually enter into our app, as the data would be auto-populated wherever possible from MLS.

If we had more time, we would have liked to

We tackled this project together with team members taking on different models. The data pipeline is shown below. Note that we would have liked to have a train-test split that was the same across all models, but did not have time to implement that. As a result, the model results are not directly comparable.

Ames, Iowa: Alternative to the Boston Housing Data as an End of Semester Regression Project
http://jse.amstat.org/v19n3/decock.pdf